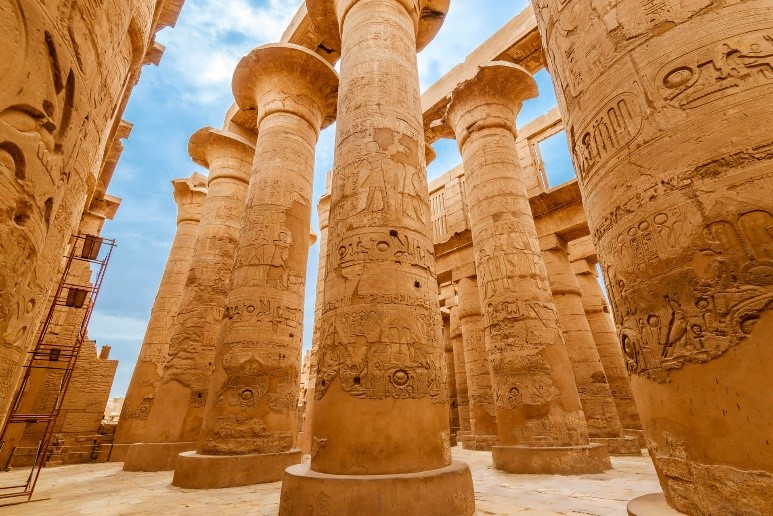 Karnak Temple is a vast temple city, with many of its structures dating back over 3,000 years. It is today the largest remaining religious site of the ancient world and it is visited by thousands of tourists every year. Being immensely popular it must be at the top of your list of places to visit. The temple grounds are vast, there is so much to see that it is impossible to do it justice in a one day visit. Usually tour group organisers will only allocate one day as there is just so much to see in upper Egypt. Incredibly this huge temple was almost completely submerged under thousands of tons of sand which preserved the structure. I always think it is strange that tourists who visited this temple back in the eighteenth century took to writing their names and the date on the only part of the temple structure that stuck out of the sand at the time. Now that Karnak Temple has been completely excavated their graffiti is still there for all to see. It is very high up on the temple columns and this always bemuses present day tourists until they work it out that the whole temple was once buried under the sand. One of the most unusual rituals that is still carried out today is that many female tourists who want to get pregnant walk around a particular obelisk seven times. Many of the locals vouch for its effectiveness! It is said that there are basically two groups of people who visit Egypt, the first group try to see as much as they can in a one week visit so they can tick it off their bucket list and never return saying “been there, done that”. The second group are the people who on their first visit realise that Egypt is a vast country with so much ancient history and many tombs, temples and ancient monuments to see that they keep coming back again and again! I fall into the second category, I love Egypt and its people, they are so friendly and helpful.